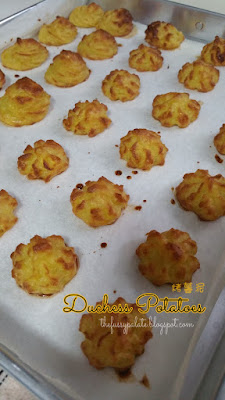 Yet another dish that was made long time back and have sat in my draft for a long long time.

I made this dish to host my sister and brother-in-law before my sister popped. And here I am posting this so late when my baby nephew is already a month plus old! 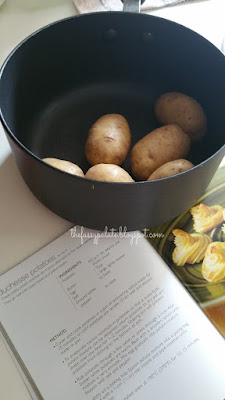 These dainty potato rosettes goes well with any grilled steaks and roast meats, and are definitely a good alternative to the usual mash potatoes.  A little effort needed before you can sink your teeth into them but I assure you, it is worth it ;)

1. Cover and cook potatoes in a pot of simmering salt water for 10minutes, or until potatoes are tender. Drain well and discard water in pot. 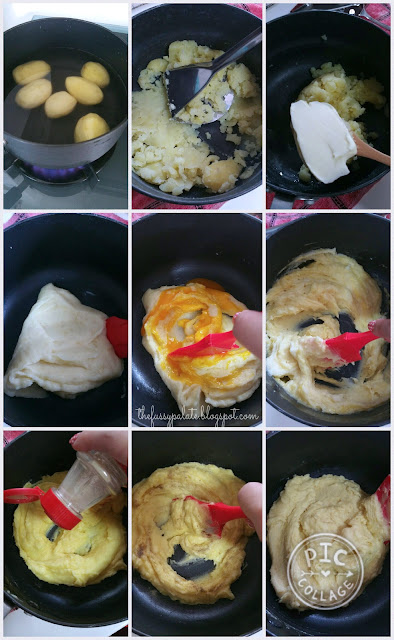 2. To evaporate excess moisture in potatoes so that a more fluffy potato mixture can be obtained, return potatoes to dry pot and shake over low heat for 1-2 minutes. Shaking pot will prevent potatoes from sticking to the bottom of pot.
3. Rub potatoes through a fine sieve, or press through a ricer. Add butter while potatoes are warm. Beat with a wooden spoon until mixture is very smooth. Mix egg gradually into potato mixture. Season with salt and pepper.
4. Lightly oil a baking tray. Spoon potato mixture into a piping bag fitted with 1-cm star nozzle and pipe rosettes onto baking tray. 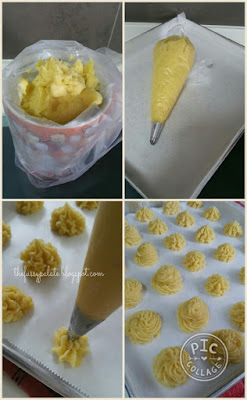 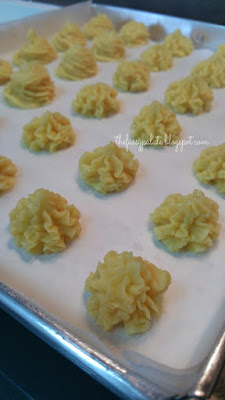 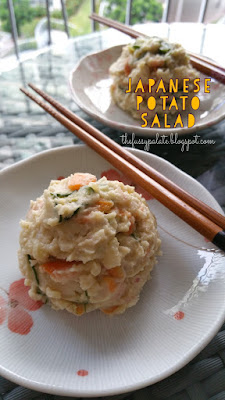 Just last week, I tried to stop myself from being a couch potato and got down to making some Japanese Potato Salad. I had most of the ingredients on hand, so why not?

Attempted this a long time back and being the lazy wife, I used the same recipe again :P 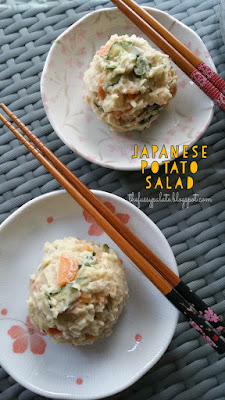 1. Rub cucumber slices with salt and allow to 'sweat' for about 30 minutes. This will make the cucumbers more crunchy. Rinse, drain and squeeze dry.
2.In a pot, bring water to boil. Add carrots and potatoes. Boil for 10 minutes. Drain.
3. Transfer boiled potatoes to a bowl. Use a fork to mash the potatoes, leaving some small chunks behind. 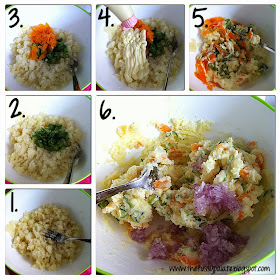 4. Add corn, carrot, cucumber, onion, and Japanese mayonnaise. Season to taste with salt and pepper. Chill in fridge before serving.

Note: Feel free to spice up this potato salad with more flavour such as chopped ham, karashi (Japanese mustard) and chopped hard boiled egg.
Posted by Unknown at 2/27/2016 11:20:00 AM No comments: I am starting the year with more food dishes than more cakes and bread!  I bake when the kick comes, and stay away when I am not in the mood.  So... be prepped that more food dishes will appear here than before :P

Here's one quick and easy egg dish that can be served in no time, and it pairs so well with plain rice or plain porridge.

I love this combi of egg and tomato. Cooked this for the first time and hubby also said it was good. 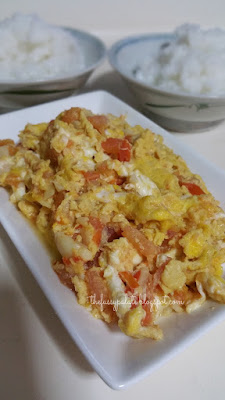 
1.  Crack eggs into a bowl and add light soy sauce, oyster sauce, pepper, sesame oil (optional) and Chinese cooking wine.  Set aside.
2.  Heat oil in pan and add in minced garlic and fry for some 30 seconds, then add in tomato cubes/slices and add in sugar then stir fry it well.  Let tomato cook till soft but not too mushy (tomato juice will ooze out and soften the tomato cubes/slices).  Spread tomato evenly over pan.
3.  Pour beaten egg over tomato and on medium high heat, let egg cook and firm up a little before mixing it up with spatula to form scramble egg.  After mixing tomato and eggs well, and when you see that the egg is cooked (yet not too dry still), turn off heat, dish out and serve immediately.
Posted by Unknown at 2/25/2016 06:23:00 PM No comments:

Skipped the CNY goodies baking this year because I wanted a good rest. Excuse it was not. I had slogged myself silly the past years with goodies baking and felt really tire out (but happy and satisfied of cuz!) when the baking project wrapped up, hence I decided a break will do me good for this year. All these explains why no CNY goodies appeared in this space.  Next year then :)

Wanted to start my new year with a slower and more relaxed pace, so I took a short break from food blogging.

Here is a cake which I baked some time back but stayed in my draft till now :) 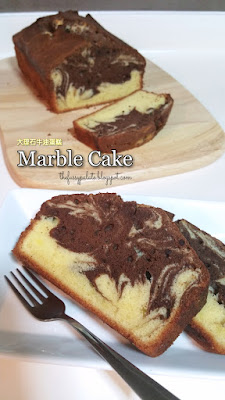 Now that I am back, I wanna share this yummy marble cake recipe by Rasa Malaysia.  A simple but yummy cake and I am glad I tried baking this. 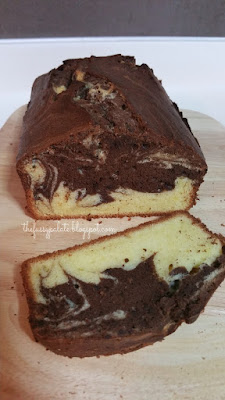 Do give it a try if you also have a love for marble cake like I do! :) 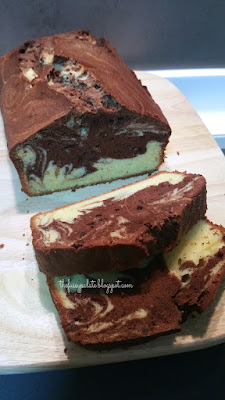 2 sticks (220g) unsalted butter, at room temperature7 oz (200g) plain flour/all purpose flour1 teaspoon baking powder7 oz (200g) fine or powdered sugar (confectioners sugar or icing sugar) - I reduced to 160g as my Hubby and I do not like sweet tasting cakes4 eggs1/2 tsp salt4 tablespoons fresh milk1 teaspoon vanilla essence2 tablespoons cocoa powder
Preheat the oven to 375°F (190deg C). Lightly grease the pan with some butter.
Mix the flour and the baking powder together and sieve. Add in salt and mix well. Set aside.
Use an electronic beater to mix butter and sugar until well combined or pale yellow in color. Add in the first egg. Beat well after each addition of egg until creamy. Scrape down the sides and add in vanilla essence and fold in the flour into the mixture and mix well. Finally, add in the milk.
Divide the batter into two portions. Stir the cocoa powder into one portion and mix well. Transfer the plain batter into the greased baking pan. Shake it lightly to distribute evenly. Pour the cocoa batter in the middle of baking pan, and lightly swirl the cocoa batter with a butter knife. I usually do the “S” shape with the butter knife a couple of times. Do not overmix. 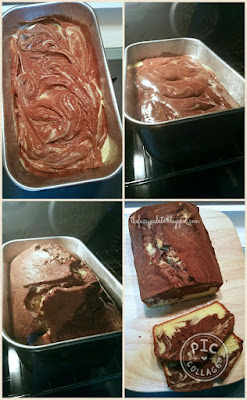 Bake until golden brown and cooked, about 40 minutes. Insert a cake tester in the middle of the cake to test doneness. Remove it from the oven and let cool on the wire rack for another 5 minutes. Remove from the pan and serve immediately.
Posted by Unknown at 2/24/2016 11:25:00 PM 1 comment:

The L♡ve for baking and cooking prompted me to start this blog - a platform allowing me to share my homecooked meals and homemade pastries' recipes, as well as to learn more from the many wonderful makan bloggers.

Janice Leck and The Fussy Palate, 2014. Unauthorized use and/or duplication of any part/portion of this blog without express and written permission from this blog’s author and/or owner is strictly prohibited. Excerpts and links may be used, provided that full and clear credit is given to Janice Leck and The Fussy Palate with appropriate and specific direction to the original content.

What I cooked & baked,