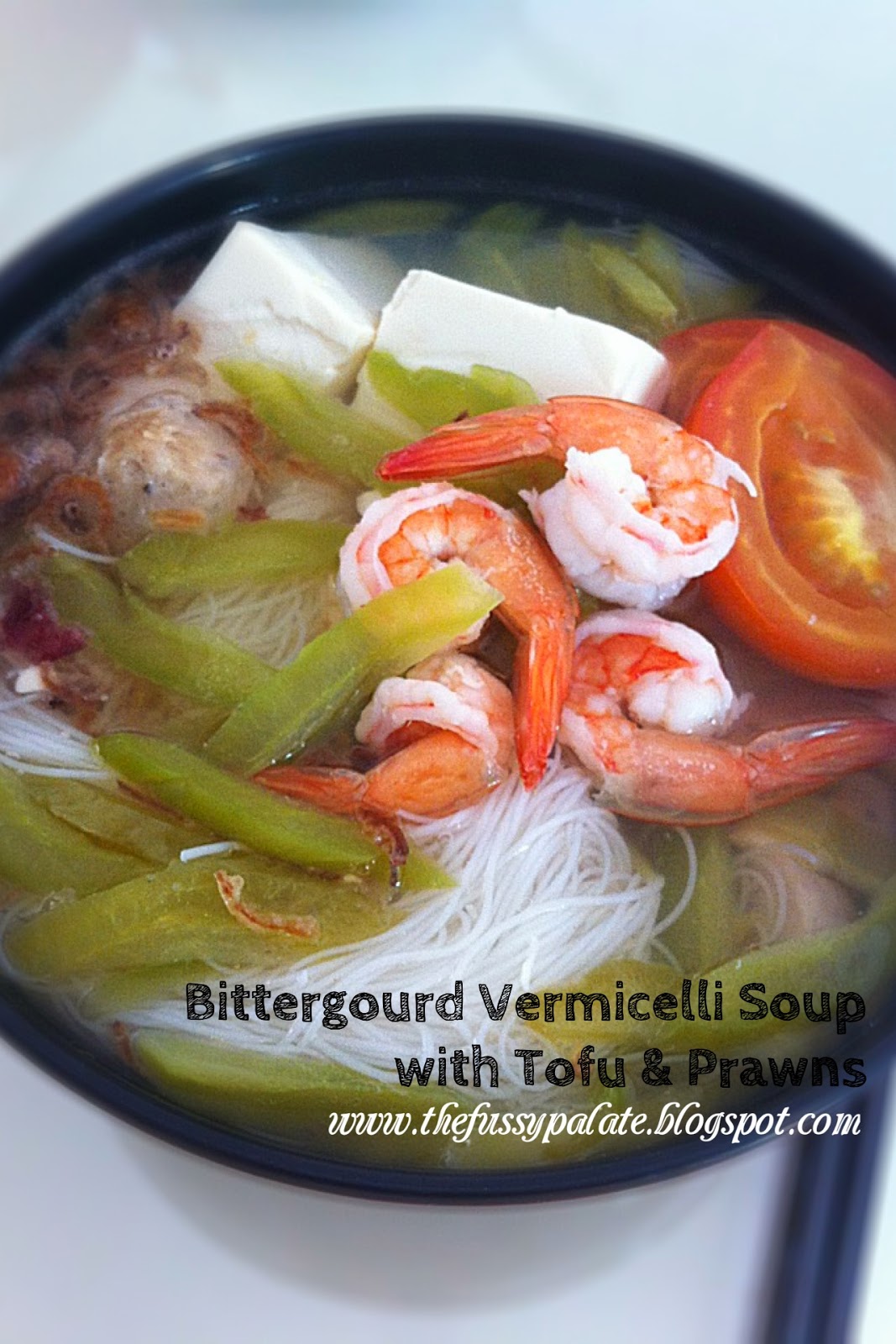 On days when I feel lazy and do not want to cook a meal that requires alot of washing and cleaning, I fall back on our favourite bee hoon soup.

All you need is a pot of anchovy stock and whatever ingredients that you can find in the fridge that goes well with the vermicelli soup and that settles a meal.

1. Season minced pork with a dash of pepper, 1/2 tsp of cornflour, 1 tsp of soy sauce, 1/2 tsp of sesame oil, few drops of cooking wine. Leave aside.

2. Put a small pot of water to boil. Put in soaked vermicelli and blanch it for 30 seconds. Drain the water, remove and divide vermicelli into 2 bowls.

3.Bring the pot of anchovy stock to boil and add sliced bittergourd. Cover and let boil for 3 minutes.

4. Scoop out seasoned minced pork into round bite sizes and drop gently into anchovy stock followed by prawns. 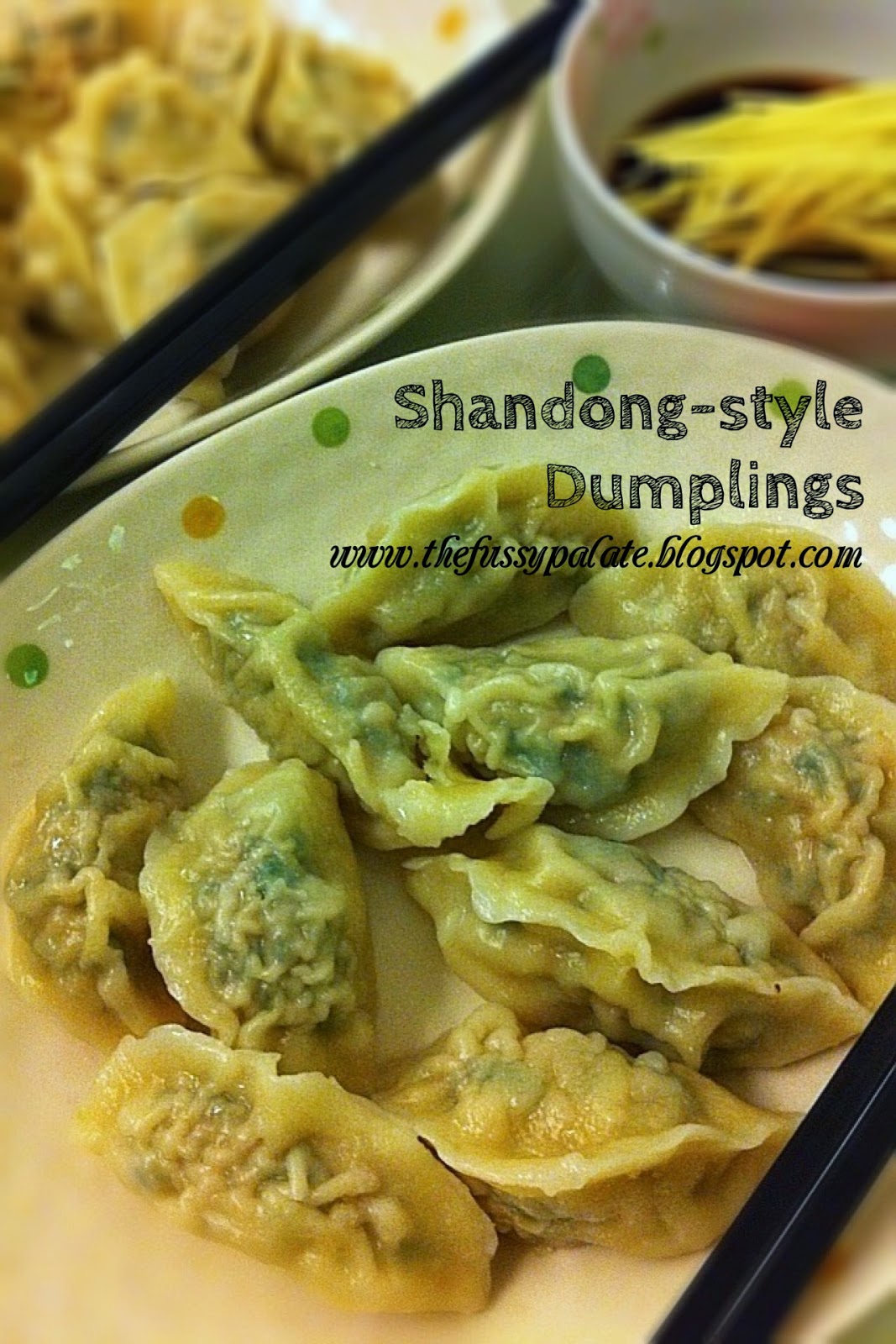 Jiaozi (饺子 in chinese), to me are like little "gems" filled with flavourful goodness that Hubby and I both love.

Having had enough of the western-style food during the past 2 weeks of vacation, I decided that I should go the chinese way for the time being, and so making and eating jiaozi is one of the way to go!  I love how we can cook them in noodles or even eat it on its own!  Good for times when you do not feel like cooking and cleaning much.  All you have to do is just to boil a pot of water and dump the frozen dumplings in and voila!, you get a fast meal out of it - best when eaten with vinegar and thinly sliced ginger.

Not wanting to take the shortcut this time, I made the dumpling wraps instead of getting ready-made ones.  So, I went on a recipe-search spree and finally decided to go with Chubby Hubby's Shandong-style Jiaozi recipe.

It was a nervous first time for me and I had my worries. All the worries about dumpling wraps turning out too thick, dough will be too difficult to hand etc turned out to be unfounded.  All I can say is, the first few wrappings will be abit difficult to handle, and the wrapped dumplings will not look as pleasant but few more practices later you will be good on your own.

This recipe is truly a keeper.  I will use this recipe again if I need my jiaozi fix next time!

Special equipment:
a 15cm rolling pin or dowel
A large, covered pot in which to cook the dumplings


Make dough:
Put the flour in a large bowl, then add water, stirring with a wooden spoon until a shaggy dough forms. Turn out dough (including any loose flour) onto a work surface and knead until smooth, about 5 minutes.  If the dough is too sticky, mix in some extra flour. If it seems a bit dry, sprinkle with a bit of water. Form into a ball and cover well in plastic  wrap. Let stand at room temperature at least 30 minutes.

Make filling while dough stands:
Put the ground pork in a bowl, and start mixing a bit of water in, stirring in one direction only. Chopsticks are ideal stirring implements if mixing by hand. Continue adding water, the soy sauce and the wine and stirring all the while until the filling looks a bit sticky. You may not need all the water so don’t dump it in all at once! At this point, add in the egg, sesame oil, ginger, dried shrimp, zucchini, chives and salt if needed. Fry off a little patty to check the taste; it should be highly seasoned and almost too salty, as it will be put into skins later on.


ASSEMBLY
After the dough has rested, continue kneading 5 more minutes on a lightly floured surface. The dough should be elastic, smooth and not sticky (it should feel as soft and silky as a baby’s bottom!). Divide the dough into two and cover the piece you aren’t using with some plastic wrap. Roll the other piece of dough into an even rope, about 20cm long. Cut the rope into 1.5cm lengths to form about 30 pieces. Roll each bit into a ball and flatten with your palm. Start rolling out each small disc of dough with a rolling pin that has been lightly dusted with flour into 7.5cm rounds, rolling from the centre to the edges, making the centre slightly thicker and the edges thinner. Remember to keep all unused dough covered when not using. 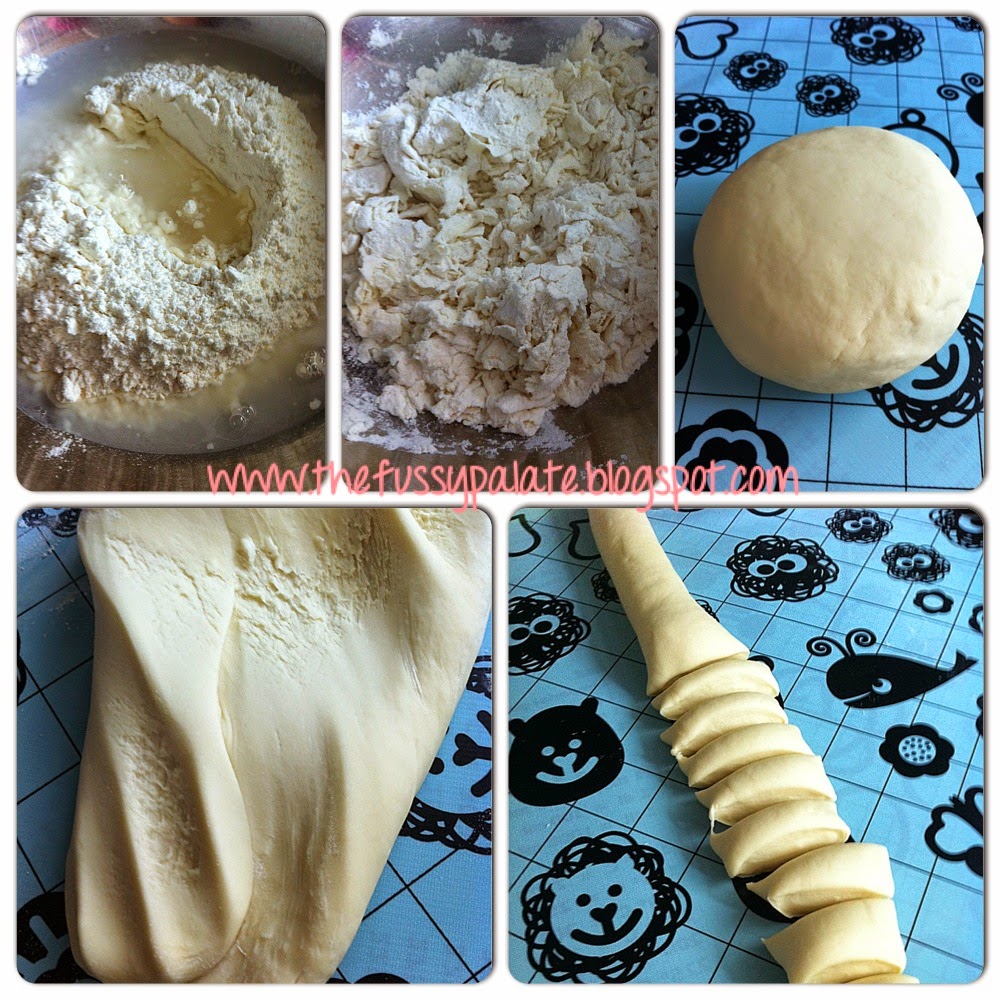 Line a tray with parchment paper or dust well with flour. Work on one dumpling at a time, keeping the remaining wrappers covered. Place about two teaspoons of filling in the middle of a wrapper. Starting at one end, seal the dumpling together by squeezing to form a crescent shape. Place filled dumpling on the prepared baking sheet and cover with plastic wrap. Repeat with remaining ingredients until all the wrappers are filled. 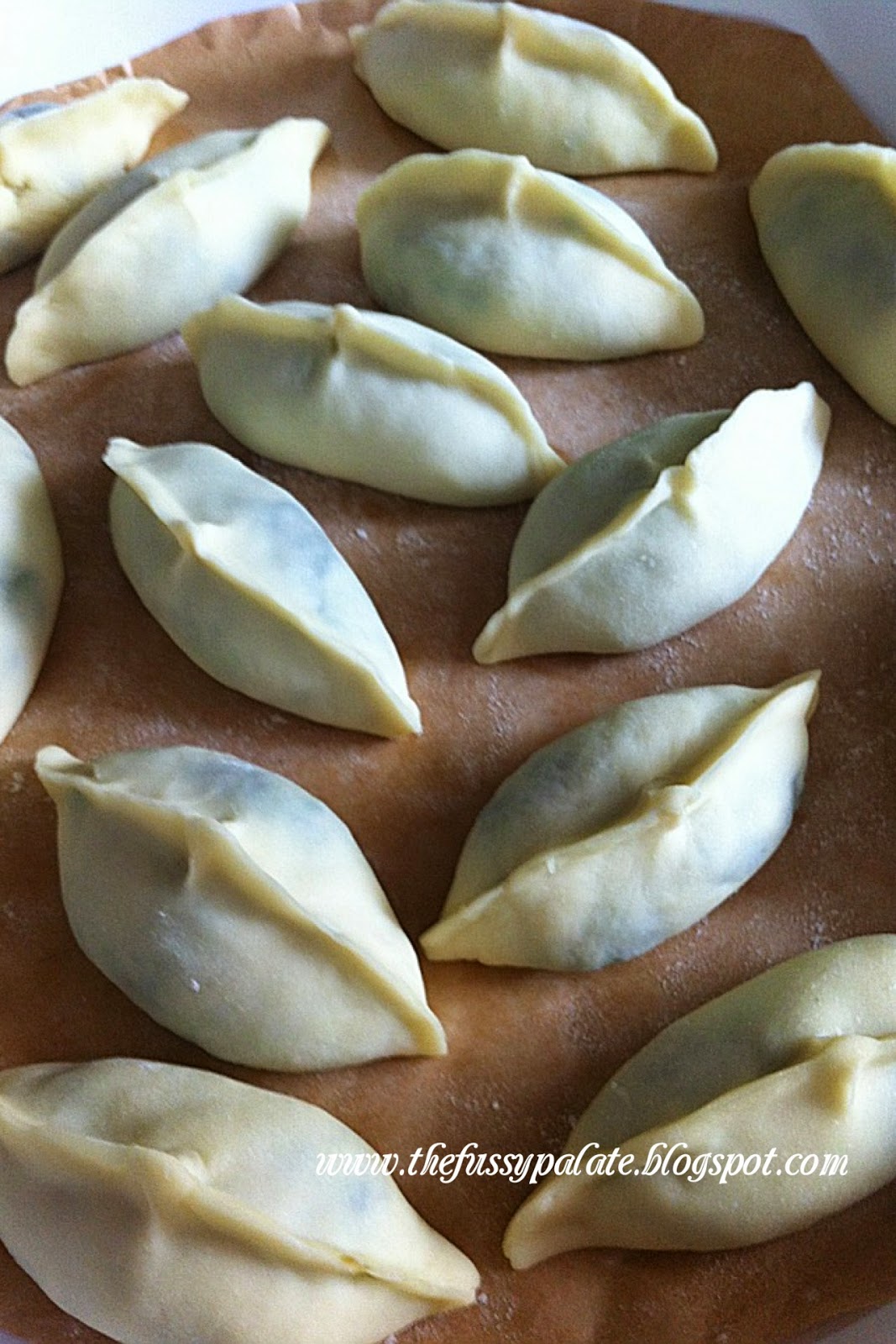 No nice neat pleats for my jiaozi this round.

When it comes to a boil, add 250ml cold water. Cover and repeat two more times. When the water comes to a boil for the third time, the dumplings are ready. Scoop out with a spider onto a plate and serve immediately with sauce on the side.


NOTE: The theory behind adding cups of water is that if you stop it before the third boil, the meat will not be cooked through. Also, if you don’t add cold water each time, the jiaozi will fill up with air and explode.


TO KEEP
You can freeze uncooked dumplings for later use. Freeze dumplings separately on trays until firm, then put them in freezer bags. When cooking from frozen, cook exactly the same way as above.
Posted by Unknown at 5/27/2014 09:46:00 PM No comments: 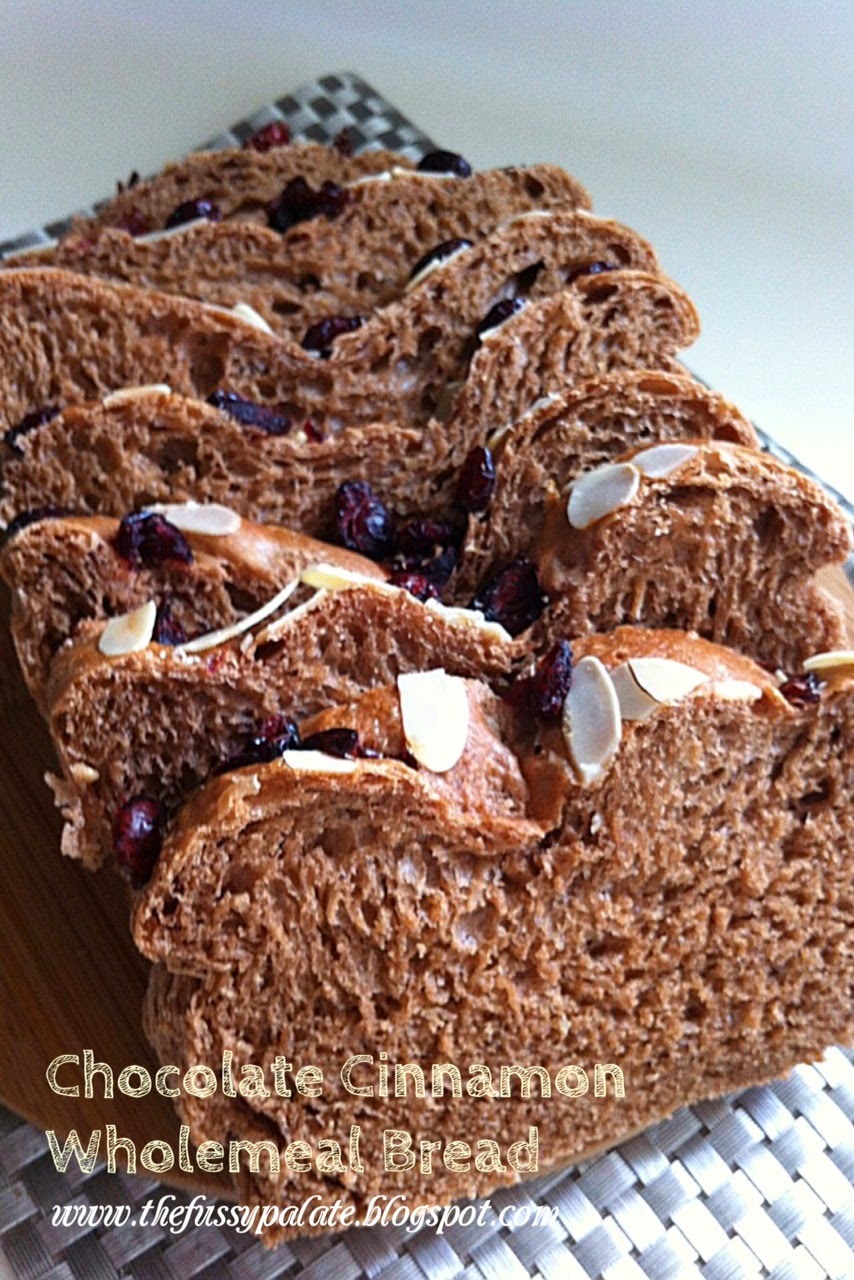 The cranberries and almond flakes were actually not meant to be the bread toppings. I had wanted to incorporate them inside the bread!!! Guessed it right? Yup, I was too engrossed with punching down the dough and rolling it up for final proof that I forgot to add the dried fruits and nuts.  Laziness got the better of me, and so I decided to just make do with it and sprinkle them on top after a milk glaze and finally sent it to bake. I thought the "decorated" loaf looked good! Heehee! 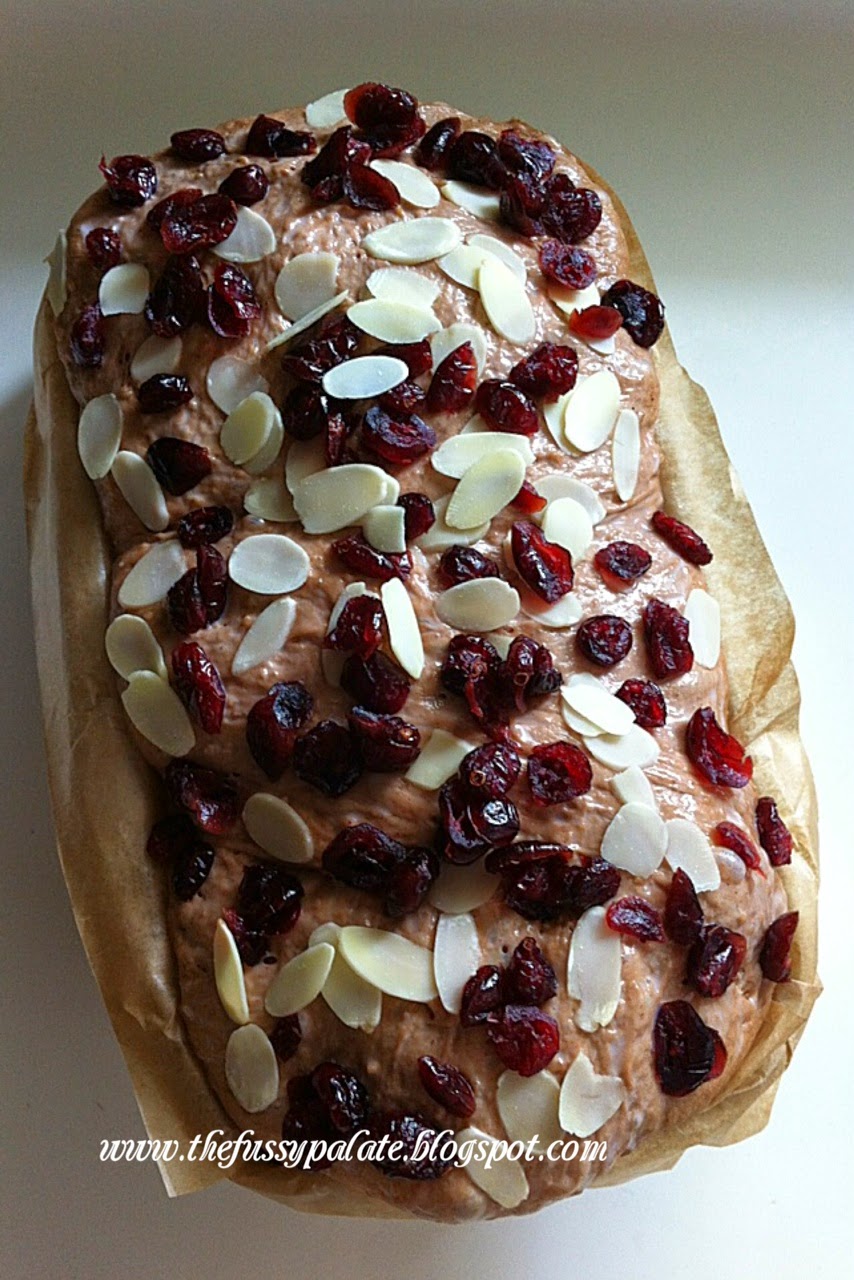 15 minutes into the baking time, I took a peep. The heavily laden loaf top sank. My heart sank too!  Oh well, not my day. Fortunately, the end product did not look too bad especially for one with a sunken top.  Softness stayed till the 3rd day, and this was all that matters, at least to me :) 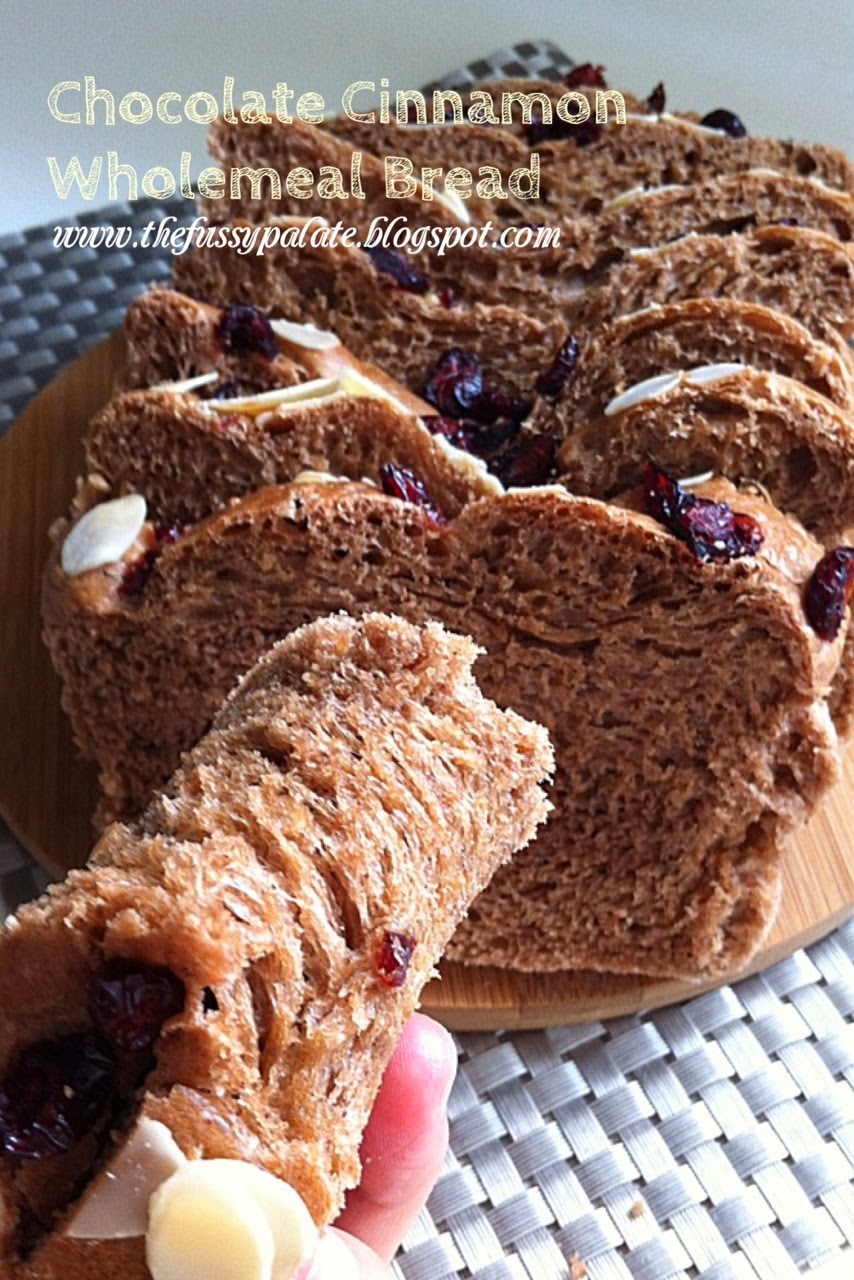 Recipe by Kimmy-cookingpleasure
I made some variations (in blue) to it though.
I halved the recipe to make 1 loaf.

Soak the dried cranberries in water for 5 minutes, drain and leave aside for use. 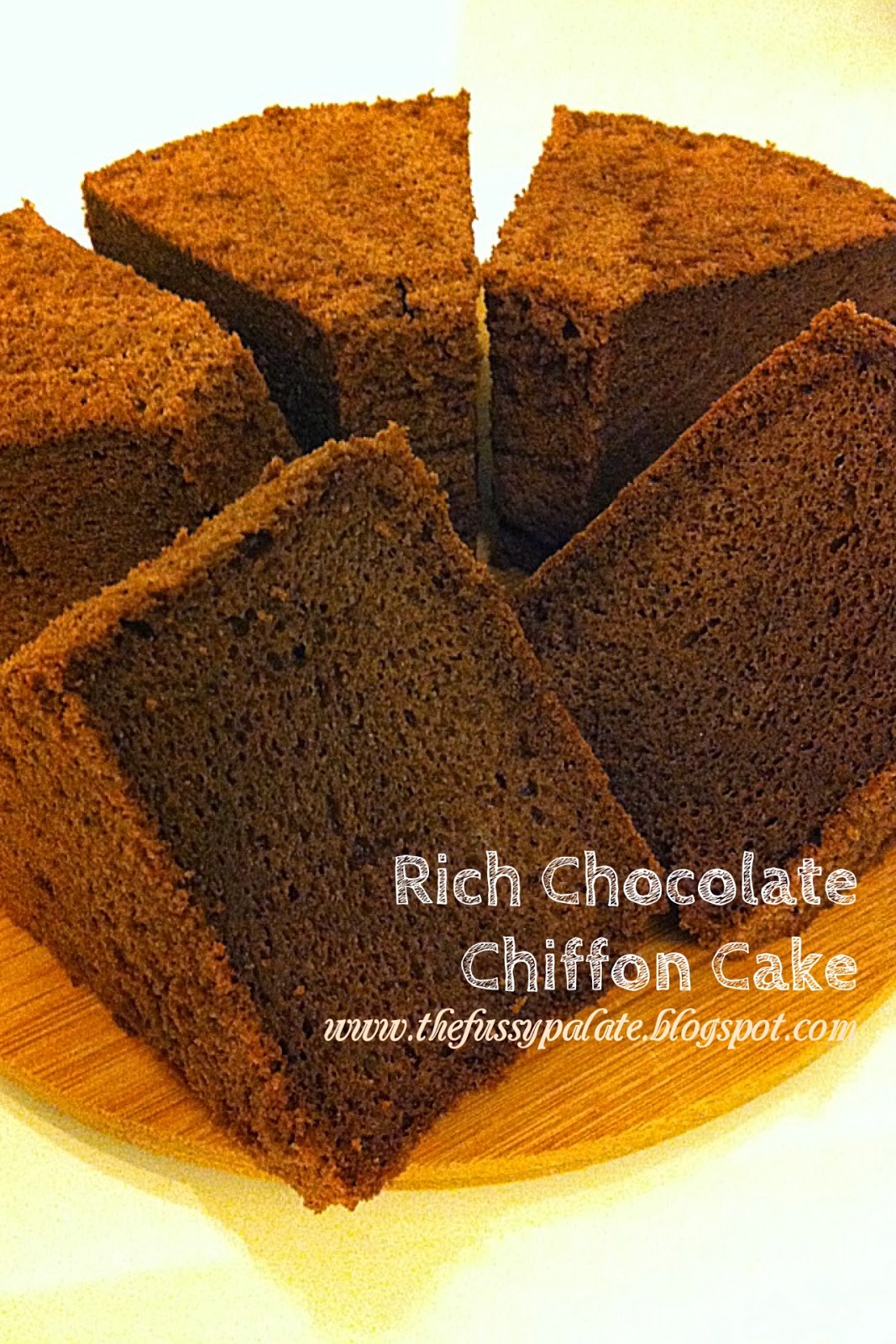 Took a break from work and got a 2-weeks plus period out of Singapore with my hubby.  We went to Central and Eastern Europe.  Free & easy, no tour.

We never like being led around on tours, hehe.  We like to sleep and laze till late, eat when we feel like it, travel at our own pace, everything with no restrictions.

It was a good break - one that we needed badly.  No stress, just play.  All we need to worry about was where to go the next day, and what should we eat for breakfast, lunch and dinner.  Life was good, and how we wish it would stay that way.  I super miss the nice cold weather and super cheap
thirst-quenching beer there!

Now that I am back to reality, life needs to be get back to normal, right? So very naturally I start my cooking and baking regime again (yeah!!!).

I wanted to do something using the chocolate pudding I "smuggled" back (I had it checked in with my big and heavy luggage).

Actually I couldn't quite make out if it is chocolate pudding or chocolate cream but well, I bought it from the supermarket in Prague and fell in love with it.  It was so smooth, creamy and best of all, rich in taste (I googled and it is actually a pudding-like dessert, and you can make them at home too!  Marketplace do sell them but I have never seen these in NTUC before and ah! I saw NTUC Finest selling it too but not Danette brand).   I just had to bring some back and bake something with it!  And so I did.  A decadently sinfully rich chocolate chiffon cake!

The chocolate smell came out and lingered in the kitchen while baking halfway in the oven.  Finally had the cake done, cooled and then cut to reveal the moist middle sections.

Hubby had it for breakfast the next day and said "this chocolate chiffon cake is delicious, really moist and rich, yet not too sweet".  It turned out the way I wanted it to be.  I am a happy gal. :) 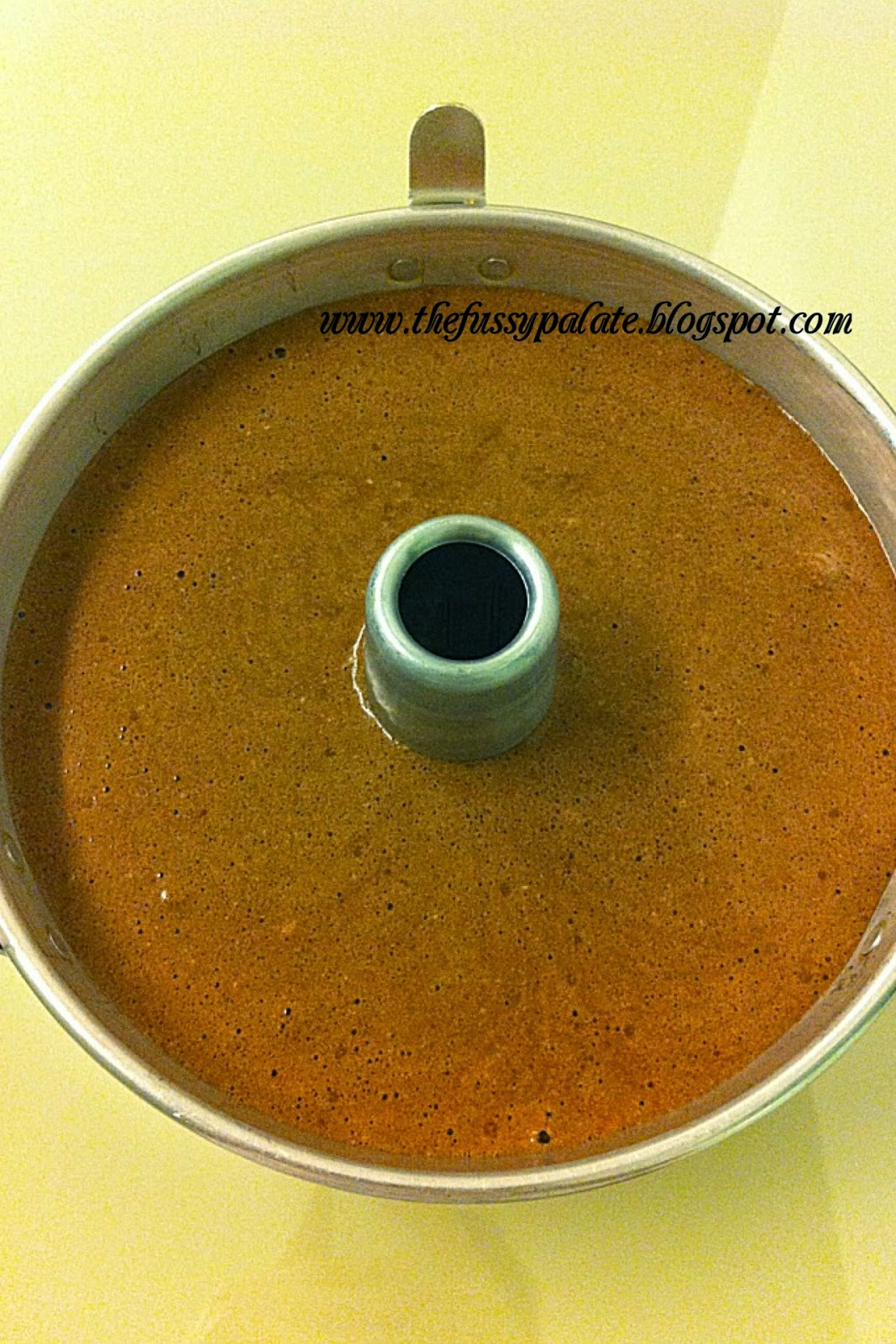 1.  Chop semi-sweet chocolate block into chunks and double-boil it with the oil.  Stir till well combined.  Set chocolate mixture aside to cool.
(As I used ready made chocolate pudding, I just mixed it together with the oil, no double-boiling needed.)
2.  Whisk egg white and cream of tartar till frothy.  Add caster sugar in egg white in 3 additions and whisk till stiff peak.  Set aside.
3.  Using the same whisk, whisk (C) till pale in colour and stir in chocolate mixture.
4.  Add (D) and whisk till combined.  Thereafter sieve in (E).
5.  Fold in one-third white meringue into yolk mixture.
6.  Fold in remaining meringue gently.
7.  Pour batter into 21cm tube pan. Tap the pan twice on the tabletop to remove excess air bubbles and bake at 170deg for about 50min or till done.
8.  Turn tube pan over to cool before cutting. 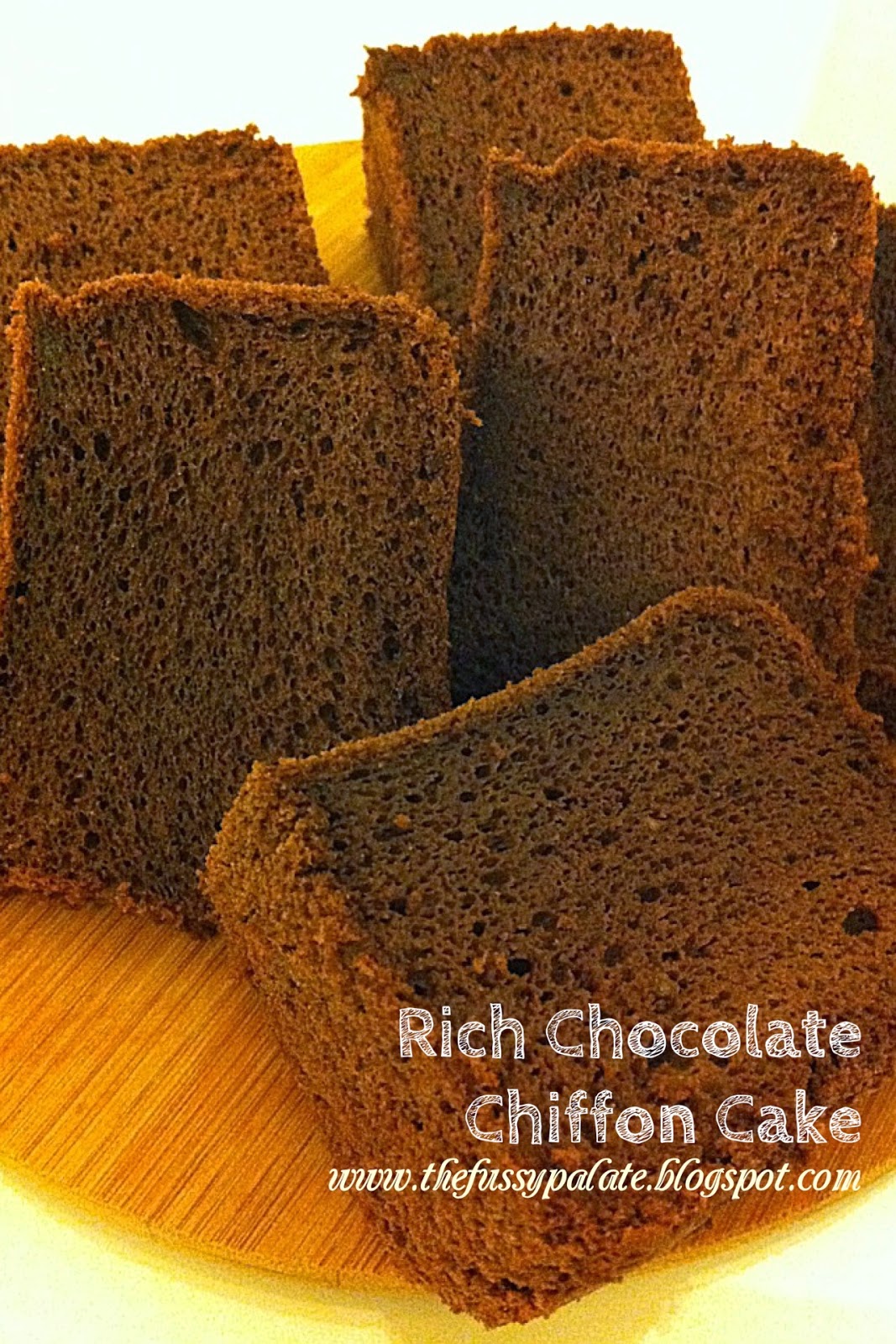 The L♡ve for baking and cooking prompted me to start this blog - a platform allowing me to share my homecooked meals and homemade pastries' recipes, as well as to learn more from the many wonderful makan bloggers.

Janice Leck and The Fussy Palate, 2014. Unauthorized use and/or duplication of any part/portion of this blog without express and written permission from this blog’s author and/or owner is strictly prohibited. Excerpts and links may be used, provided that full and clear credit is given to Janice Leck and The Fussy Palate with appropriate and specific direction to the original content.

What I cooked & baked,